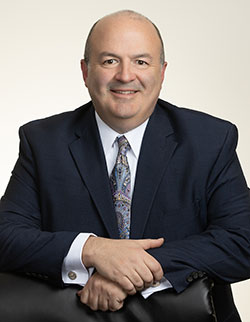 Mike Mikulski joined the Firm in 1998, becoming a shareholder in 2008. He is currently the managing partner of the Firm’s New Jersey office. His trial practice centers primarily upon insurance defense, professional liability, general negligence and employment litigation. He also has extensive experience defending social service agencies, schools and non-profits in all aspects of litigation including sexual misconduct allegations, IEP/IHP litigation and general legal counseling.

In addition to practicing law, Mike is proud of his service to our country and the community. Mike has recently retired from the United States Army Reserves at the rank of Colonel. Colonel Mikulski served 30 years in the Reserves including two combat tours, one in Fallujah, Iraq (2004-2005) and one in Kabul, Afghanistan (2013-2014). Mike retired with numerous decorations including: Legion of Merit Medal, Bronze Star Medal, two Meritorious Service Medals, Joint Service Commendation Medal, NATO Medal, Army Commendation Medal and the Combat Action badge.

In the community, Mike is currently the Mayor of Southampton Township, New Jersey, a community in Burlington County with a population of over 10,000 residents. Prior to becoming Mayor, Mike has served as a Committeeman since 2015. Prior to joining the Township Committee, Mike was an elected member of the Southampton Township Board of Education and also served as President of the Seneca Warriors travel baseball program.

Mike was elected to be a Trustee to the Burlington County Bar Association in 2020 and is also Chairman of the Association’s Military Affairs Committee.